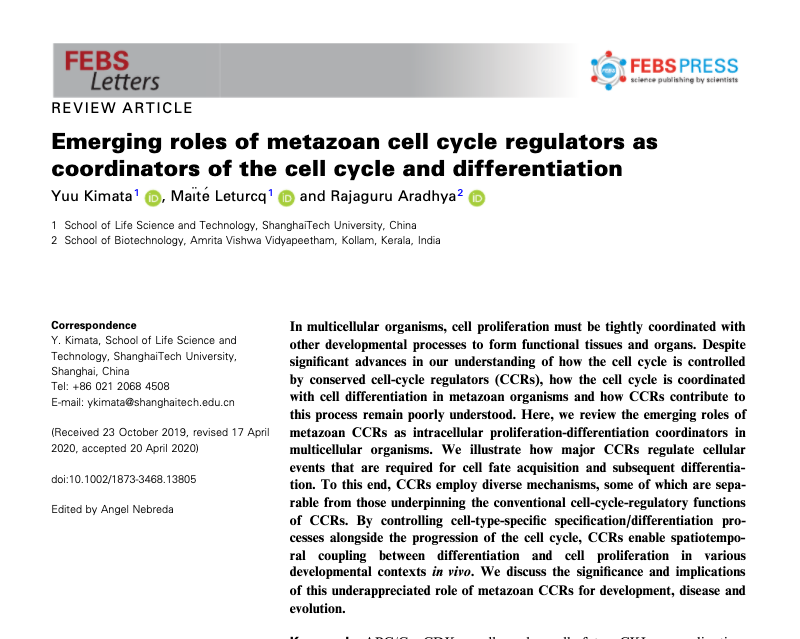 We (Yuu, Maïté and our collaborator, Rajaguru Aradhya) published a new review titled, “Emerging roles of metazoan cell cycle regulators as coordinators of the cell cycle and differentiation” on the special issue on cell cycle control of the FEBS Letter.
https://febs.onlinelibrary.wiley.com/doi/full/10.1002/1873-3468.13805

Cell proliferation and differentiation are two paramount issues in the development of multicellular organisms, including humans. The precise regulation of the cell cycle ensures the production of the right number of cells and controls tissue and organ growth; whilst timely cell differentiation accounts for the generation of a wide variety of specialized cells, which are necessary for the different physiological functions performed by each part of the animal body. In order to form and maintain healthy tissues and organs, the two processes must be coordinated in time and space. However, how this coordination is achieved during development and in adult animals is not fully understood. The classic view on this coordination highlights the roles of common cell signaling pathways and transcription regulators, which regulate each process rather independently. In this review, Professor Kimata and colleagues provide a new perspective: cell cycle regulators (CCRs), as the core machinery for the control of cell proliferation, can directly control various processes of cell specification and differentiation through their non-canonical functions, mainly through post-transcriptional regulation. Thus, CCRs act as the intracellular proliferation-differentiation coordinators, coupling cell fate determination with cell division, in metazoan cells.

The review illustrates the critical role of CCRs in animaldevelopment and tissue homeostasis by numerous examples, in which various major CCRs exert dual functions. These CCRs include cyclin-dependent kinases (CDKs), mitotic kinases Polo-like kinases and Aurora kinases, CDK inhibitors (CKIs) and the ubiquitin ligases the anaphase promoting complex/cyclosome (APC/C) and Stem cell factor (SCF). The examples of tissues range from early embryos and tissue-specific progenitors and stem cells, to pluripotent stem cells. For example, CDKs and mitotic kinases regulate the distribution of cell fate determinants during asymmetric division of early embryos and stem cells and affect the fate of daughter cells; CDK4/6, which is known as the target of anti-tumor drugs, also directly regulates gene transcription and signal transduction. CKIs also affect the pluripotency of stem cells by regulating pluripotency factors and key signaling pathways. Finally, APC/C and SCF target transcription factors and components of many signaling pathways (including TGF-β, Wnt, Hedgehog, etc.) for degradation. These CCRs regulate these processes while controlling the progression of the cell cycle. There are many unresolved questions in this field, including the pathological links of these dual functions of CCRs, some of which we are currently working on.

The current focus of our lab is to explore novel non-canonical functions of CCRs by which CCRs directly control the function of transcription regulators and intercellular signaling pathways in cell fate specification processes, and to define how the dual functions of CCRs are regulated in vivo. We sincerely welcome ambitious students and postdocs who are interested in joining the team to explore the secrets in metazoan biology together.