The cell cycle is the self-renewal and duplication process of the cell. While the cell cycle is essential for proliferation for any living organism, it is also required for growth and normal development and tissue homeostasis for multicellular organisms, including us humans. To this end, in metazoans the cell cycle must be coordinated with developmental and physiological processes. Disruption of this coordination leads to adverse consequences, such as birth defects, cancer, tissue degeneration and ageing.

To investigate the mechanisms underlying this crucial coordination, we focus on a large group of evolutionarily conserved proteins commonly called as “Cell Cycle Regulators (CCRs)”. Recent studies from our lab and others demonstrated that in multicellular organisms CCRs not only control the cell cycle but also regulate cell fate choice and cell differentiation through previously unknown molecular functions, acting as “intracellular proliferation-differentiation coordinators” (reviewed in Kimata et al., 2020).  Our lab has been exploring these novel metazoan-specific functions of CCRs by harnessing the extremely powerful genetics of the multicellular model organism, Drosophila melanogaster (fruit fly), equipped with advanced in vivo imaging methods, cutting edge multi-Omics analysis and artisan biochemical techniques. Through our research we will decipher the evolutionally conserved molecular mechanisms that are integrating cell proliferation with the development and the physiology of multicellular organisms. Furthermore, we examine their homologous mechanisms using cultured human cells and mammalian organoids to translate our findings in Drosophila into humans. Our research will provide key insights to fill the gap between cell biology and developmental biology and will also help develop new approaches to treat incurable diseases such as cancer. Currently, several lines of projects are ongoing in our lab as follows.

1. Novel cell cycle-independent functions of CCRs in the control of cell fate choice and  cell differentiation

A wide variety of cell behaviours in vivo, including cell differentiation and morphogenesis, are controlled by intra/intercellular signal transduction and transcription factors mainly through gene regulation. Mounting evidence suggests that some CCRs directly regulate the activities of these developmental factors in concert with cell cycle regulation. As a prime example, we recently showed that one of the master CCRs, Anaphase-Promoting Complex (APC/C), inhibits the transcriptional activity of a major extracellular signalling pathway, Wnt pathway (Wingless pathway in Drosophila), by degrading a its positive modulator Nek2 in the Drosophila eye imaginal disc. Through this mechanism, APC/C coordinates the cell cycle exit of progenitor cells with the induction of differentiation into more specialised cell types (Martins et al., 2017).

We are extending this earlier study by conducting genome-wide screens of CCRs  to identify novel non-cell cycle functions of CCRs in Drosophila. Through this screen we have identified several CCRs that severely impair retinal differentiation upon knockdown. We are currently charactering the underlying molecular mechanisms.

The genome-wide screen for cell cycle-independent functions of CCRs

In addition, we are also examining the functions of human orthologues of Nek2 in the control of Wnt signalling in human cells and intestinal organoids, in collaboration with Marc de la Roche (University of Cambridge) and Andrew Fry (University of Leicester).

2. Regulatory mechanisms of the G0 phase and cell cycle exit

A large proportion of cells in the adult animal are not actively dividing and are dormant. For example, most of tissue-specific stem cells are in a reversible quiescent state (often called “G0 phase“) and only divide upon injury to repair the tissue. Meanwhile, terminally differentiated cells, such as neurons and muscle cells, have irreversibly exited from the cell cycle and never proliferate. It remains largely a mystery how these dormant cell cycle states are controlled and maintained, and are coordinated with cell type/tissue-specific functions. 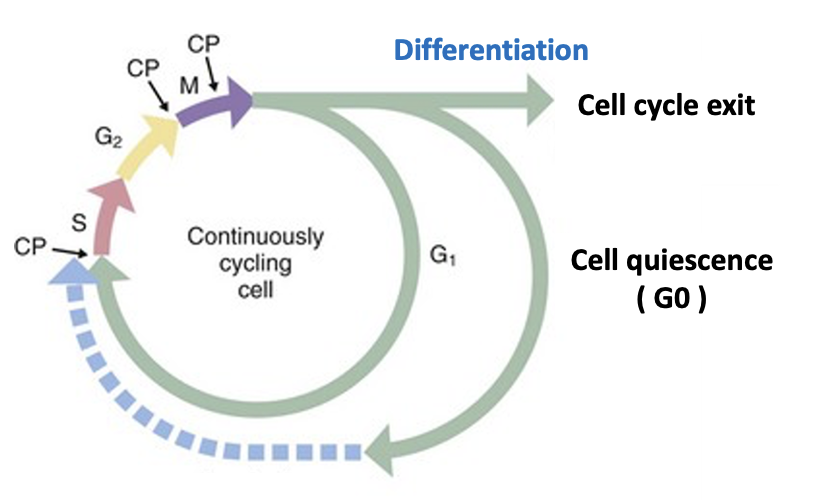 We are investigating these enigmatic cell cycle states in vivo and in vitro. By using terminally differentiated tissues of Drosophila, such as the brain and the gut of the adult fly, we are investigating how the quiescent states of tissue-specific stem cells and differentiated cells are controlled in vivo and how their deregulation impacts on the homeostasis and function of these tissues. We are also investigating precise regulatory mechanisms that coordinate the entry into G0 phase with genetic and epigenetic states of genome DNA in cultured transformed and untransformed human cells, by introducing recently developed rapid protein targeting systems. 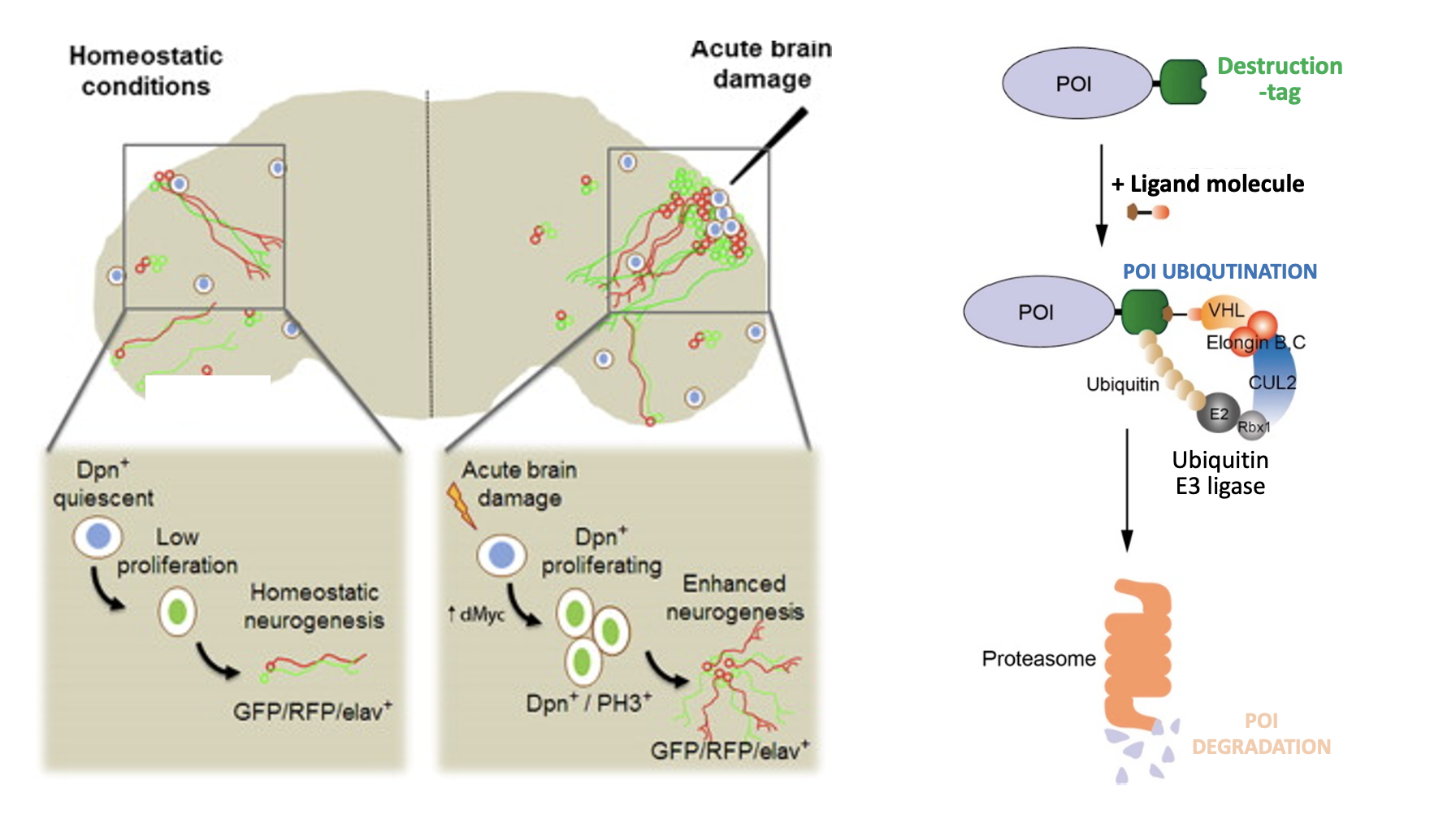 3. Molecular interactions between CCRs and the centrosome

The centrosome is the animal-specific organelle which, by regulating cytoskeletons, provides spatial and directional control and mechanical strengths to a cell. In non-dividing cells, centrosomes can  be transformed into primary cilia to regulate signal transduction and mechanical sensing. Centrosome abnormality is associated with various disorders, including cancer, microcephalies and ciliopathies.

Mounting evidence demonstrate that various CCRs interact with centrosomes and primary cilia and reciprocally control the functions of each other in multicellular organisms. In the collaboration with David Glover’s lab and Pietro Lio’s lab (Cambridge University, UK), we previously found that the APC/C activator CDH1 (Fzr in Drosophila) directly binds to a conserved centrosome component Spd-2/CEP192 in Drosophila tissues through in vivo proteomic analysis. We showed that Spd2 recruits CDH1 onto the centrosome to promote the degradation of Aurora A, a centrosomal substrate of APC/C, which is important for maintaining the number of neural stem cells in the developing adult brain (Meghini et al., 2016). Collaborating with Renata Basto (Institute Curie, France), we also showed this interaction is also important for the centrosome regulation specific to asymmetric division of neural stem cells (Gambraooto et al, 2019). Furthermore, by creating new dominant mutations in an APC/C cofactor Vihar/Ube2C using CRISPR genome editing technique, we recently showed that APC/C controls the migration of centrosomes to the future oocyte during oocyte specification. This control is mediated by the degradation of Polo/Plk1 kinase, another key centrosomal kinase whose levels are often upregulated in cancer cells (Braun et al., 2021). We are further exploring the interactions between CCRs and centrosome/cilia components and their functions in various Drosophila tissues and human cells and organoids.